Sometimes you come across a stitch that grabs your attention and you just have to try it out. I found an interesting stitch on Luzine Happel's blog here. Although it's a Schwalm filling stitch, I wanted to try it as a Pulled Thread stitch, that is without any threads being cut and withdrawn from the ground fabric. The stitch is a variation of Honeycomb stitch. More about that later.

I rather like the usual Honeycomb stitch. It's a pretty pulled stitch with a good surface texture too. And it's easy to embroider. 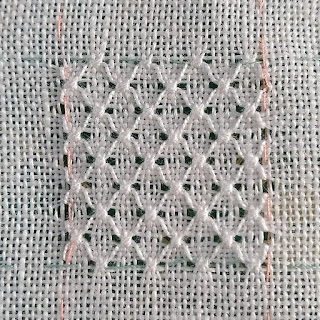 I took these photos on a dreadfully dull, dark day but you may be able to see how the stitch changes with the angle of the light. The overall look of diamonds on the surface changes to a strong diagonal pattern sloping off in one or the other direction. 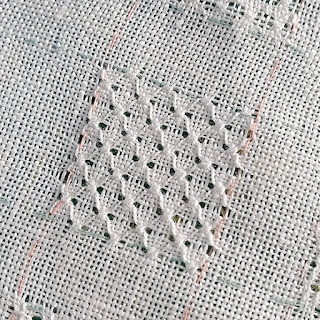 Going back to the new Honeycomb variation, it's embroidered around a central group of threads instead of in the usual straight rows. It took me a few tries to change my way of thinking and get into the rhythm of the stitch to complete one round. 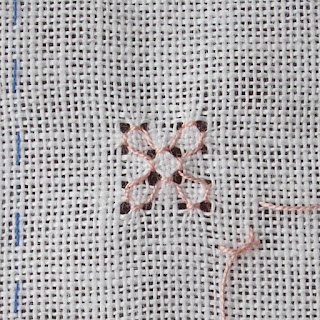 I don't know if you also talk yourself through a stitch or not, but eventually I was saying to myself  "backstitch; up over 4 and scoop; backstitch; down over 4 and scoop; and backstitch across the corner. Repeat." This will make more sense once you start experimenting with the stitch. There are step by step instructions on Luzine's blog and there are good photos to illustrate the steps too.

Once the first round is complete, the subsequent round lies touching it. At this point, you do need to turn the work counterclockwise 90 degrees before you start on that next round. For me, it became easier to work the second round if I totally ignored the previous completed one. Honeycomb is an easy stitch but this variation of it needs more attention.

I first tried stitching over 4 threads, so that one whole round formed a block over 12 threads. See on the left below.  My second sample on the right is embroidered over 3 threads so that each block is over a total of 9 threads. They almost look like two different stitches. 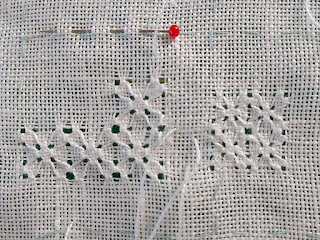 I still need more practice with quite a few aspects of the stitch: counting and planning where best to start; the little holding stitch on the back that you need before moving to the next round, and always, tension. Now to complete the two areas I started on my sampler - while I remember how I was doing it!

'Till next time, happy stitching!