This little pulled thread embroidery sample became my first oblong pincushion. With no fixed plan in mind, the pincushion grew from this small design as I went along. 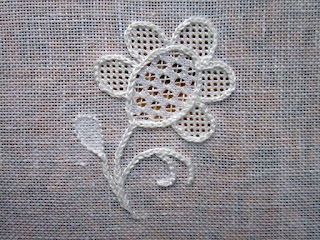 I damp stretched the embroidered flower sprig before deciding what to do with it. Most of my pincushions are square. This time I wanted to try something different. 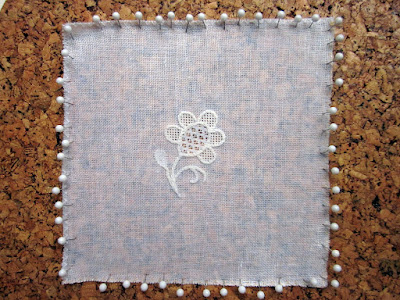 The embroidery seemed a little plain on its own. Perhaps it needed some lace on either side to soften it? Cotton lace looked too heavy, so I went with a lighter synthetic lace instead. I would normally stick to all natural fibres, but the synthetic lace gave the delicate effect I was looking for. Backstitch over two linen threads secured the lace to the embroidery. 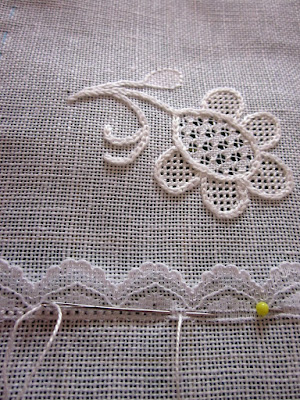 I had to iron the linen very carefully after I added the lace. With the high heat that linen requires, the lace would have shriveled up under a too hot iron. Once the lace was stitched in position, I withdrew a thread, four threads away from the backstitched lines. 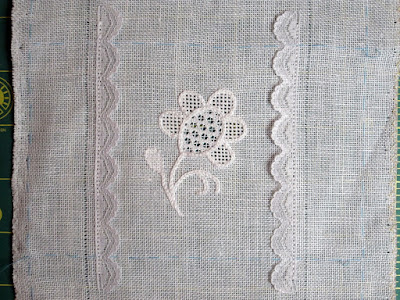 Hemstitch would open up the gap left by the withdrawn thread a little further and give the lace an 'anchor'. The first row of hemstitch is on the left in the photo below. It needed more than this. 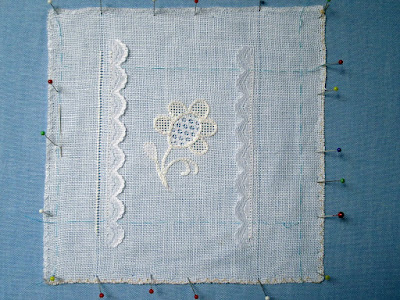 I finally settled on a row of hemstitch on both sides of the withdrawn threads. The hemstitched rows finished off and balanced out the design, 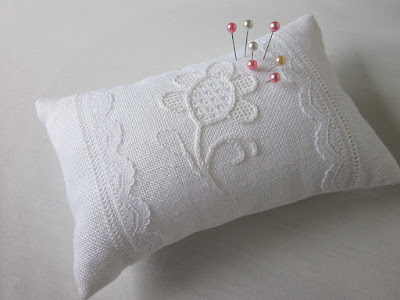 When developing a new pattern, I sometimes stitch a number of samples to adjust the design, or test out stitches, tension or finishing ideas.  An oblong pincushion was the my initial idea for the flower sprig design, but I eventually chose to stay with a square pincushion shape. Instead of adding lace as I did for the oblong pincushion, I chose four-sided stitch to border the central motif. 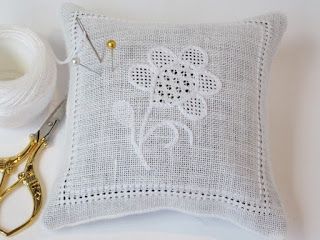 Visitors to my Etsy shop Lynlubell may recognize the Flower Sprig pincushion which is available in the shop as a digital pincushion pattern. Click here to visit the shop and view the pattern.

Till next time, happy stitching!