When I completed the embroidery for the milk bottle top pincushion, I looked back at my previous post here and realized that I forgot to include a photo of the plastic milk bottle tops I'm using.

I found it interesting that the bottle caps I collected in Cape Town seem to be identical to those on the 2 litre milk containers here in Brisbane. Perhaps the machines that produce the plastic milk bottles and their tops are made and sold internationally. If so, it's no wonder the bottle tops are the same. 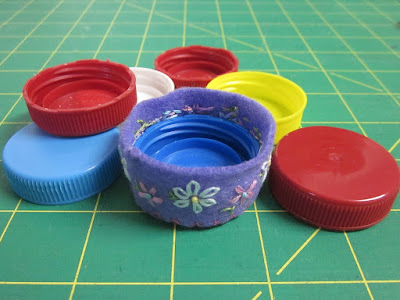 You can see in the photos that the strip of embroidered felt that forms the side of the pincushion is quite a bit wider than the height of the bottle top. 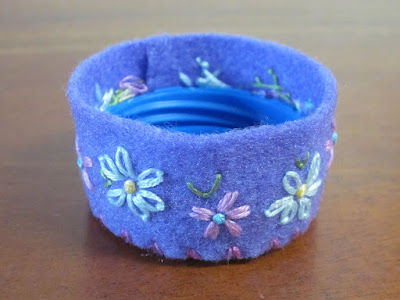 Don't worry, it will be supported when the top of pincushion is fitted into place. The circle for the top is filled very firmly and tied off leaving about a 2cm gap. 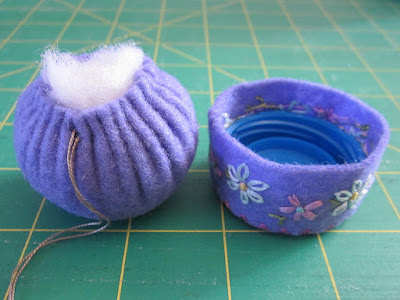 I rather like the closed buttonhole stitch, a variation of blanket stitch, that joins the embroidered strip to the top and bottom of the pincushion. Although I'd seen the stitch a few times in embroidery stitch books, it didn't seem like one that I'd want to use. When I tried it out on the pincushion, it was just the right stitch. It gives the effect of a narrow braid joining the top to the side. It defines the embroidered band nicely too. 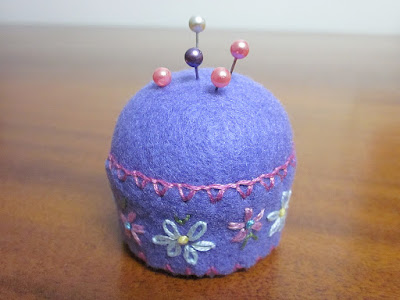 Till next time, happy stitching!