What do you do when your 2 year old grandson appears on Skype and asks you to please make a superhero cape for him?

First you find a free sewing pattern for a superhero cape courtesy of Google. The pattern I found at threadridinghood.com comes in two sizes - for toddlers up to 4 years. It was easy to print the pieces of the pattern and tape them together ready for cutting out. There is also a clear step by step tutorial on the website here on how to make it up. 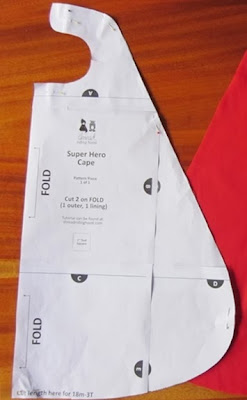 Then you dash off to the fabric shop and buy some bright red fabric.  Home again you search through your boxes of fabric that you can't bear to throw away because you might use them one day and you find that red lining that you've had for 20 years. Actually its even longer than that! And it matches perfectly.

Then a Google search for an image of a superhero symbol to applique onto the back of the cape. The request was for a Lightning McQueen cape, but I had decided to make two capes, one for a friend to wear or for a little sister or brother when they got a bit bigger. The Superman symbol seemed simpler than some of the others to use for machine applique. 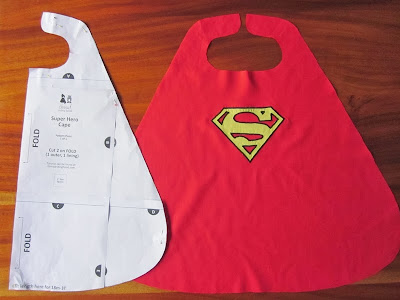 Since I have two grandsons aged 2 and I wanted to make two capes for each one, the one cape I was originally asked to make became 4! 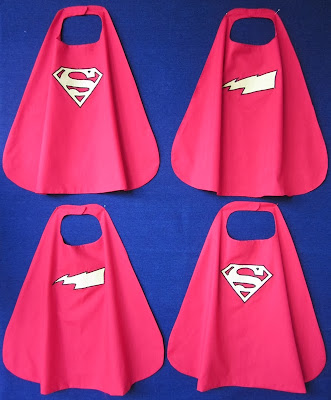 (The capes were a nice red and not that funny bluish colour!)

Jake flies around in his superhero cape until he's red in the face and ready to drop while Lila, complete with dummy, unpacks the dishwasher. Supergirl! 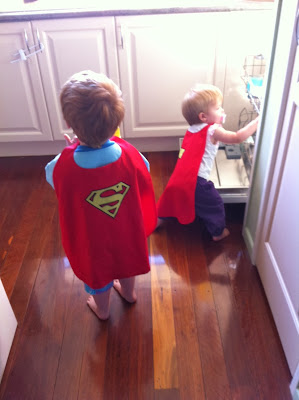 P.S. Liam prefers to carefully fix the cape around Grandpa's neck and then watch him fly around the basketball court. I laughed so hard I missed taking that photo.